Continuing Need for Volunteers in Medicine 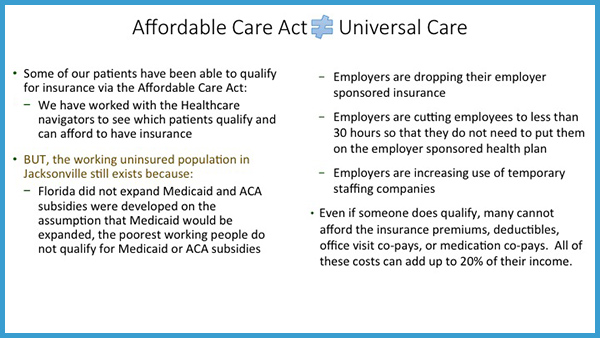 The ACA has created a certain amount of confusion about the continuing need for Volunteers in Medicine. Although our patient volume has dropped slightly, the ACA still leaves a huge void in healthcare access and affordability.

1. Eight million people signed up for private insurance on the federal and state exchange during the open enrollment period that ended March 31st, according to a report from the DOH services. Since as many as 2/3 of enrollees had prior coverage and 10-20% of people have yet to pay their first premiums, the net impact of the ACA’s exchanges and federal subsidies on the number of uninsured won’t be clear for several months.

3. As of March 28, 21 states have decided to opt out of the Medicaid expansion…Florida is one of these….and three are debating their participation (Missouri, Pennsylvania and Utah). Most of the states opting out require patients to make less than 50% of the federal poverty level income to be Medicaid eligible. The Commonwealth Fund estimated the states opting out of the expansion will forgo an estimated $34.7 billion in federal funds between 2014-2022.

5. Businesses with 50 workers or less are not required to provide or report coverage. The large employer mandate (greater than 100 employees) has been postponed for one year and will be phased so that in 2015 employers only need to cover 70% of employees working 30 or more hours per week to avoid a penalty, rising to 95% of employees in 2016.

6. Some people who qualify for the Affordable Care Act still cannot afford the coverage due to the cost of subsidies, PLUS the copays.

A message from Actress Jayne Atkinson